Bible Study: Comparing Gutenberg's invention with the rise of the World Wide Web

The course I am taking this semester -- Survey of Publishing: From Text to Hypertext -- is getting quite interesting. In the past few classes we've gone over the transition from manuscripts to printing, and it's quite remarkable how the developments in Mainz in the 1450s parallel the Internet publishing revolution of the 1990s. Consider the page from this Latin bible (from the Library of Congress website): 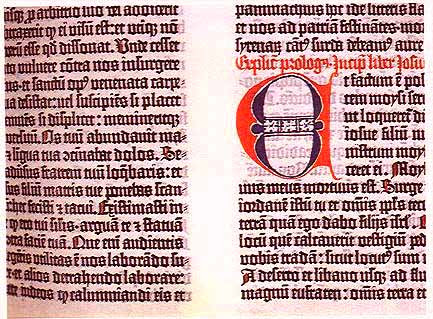 Compare it with this one, from a different bible now housed in the Free Library of Philadelphia:

The top example is a Gutenberg bible, while the bottom image is from a "Paris" bible made two hundred years earlier. Gutenberg basically tried to mimic the illuminated manuscripts that had been made by scribes, in terms of the lettering and the use of hand-painted letters at the beginnings of new sections. He did not immediately see the potential of his application for new styles of books and new uses of printing.

When our instructor, Matthew Battles, showed us similar slides in class, I was immediately reminded of the Web publishing models used by many media companies in their initial approaches to the Internet. Web designs and content-production strategies were often based on the same strategies used for paper products.

It's not just a 1990s thing, either. Even though the WWW has been around for about 13 years, we still see print media models dictating website content. I heard from a Chinese magazine editor last year that their news cycle is based on the deadlines and submission processes used for their weekly print edition. A friend who works for a recently launched U.S. monthly said the Web design was carried out by the print graphics team, and was basically a copy of the print edition.

While I am comparing the rise of the printing press and the World Wide Web, it is important to note a few other historical developments. First, manuscript editions didn't immediately die out with the printing explosion that burst across Europe in the 1460s and 1470s. Manuscripts continued to be produced into the 16th century, many decades after presses had spread to most minor cities in Western Europe. Additionally, while the printers of this era quickly discovered new applications for printing presses (e.g., the use of scientific charts, the creation of mass-produced handbills, and illustrated children's books), they could have never conceived of the magazine, book, and newspaper innovations developed in the 20th century. We are seeing something similar happening right now -- paper-based printing is still widespread, while the Web world is gleefully experimenting with new applications and media models. And while we have vague ideas that virtual reality and virtual worlds are the future of the Web, we have no idea of what these technologies will turn into 100 or 200 years from now.
Posted by I Lamont at 10/27/2007 07:58:00 AM