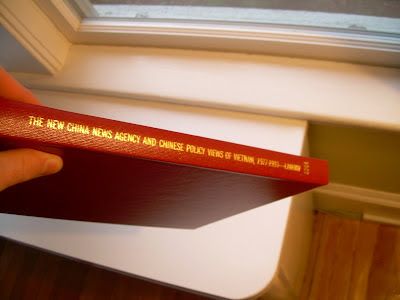 Here's how it went down. My thesis director, Professor Alastair Iain Johnston, signed off in the late spring. I then had to go through a few formatting revisions with my Extension School research advisor, Dr. Donald Ostrowski. That took the better part of the summer, in part because he has a lot of other work to do, and I was in Asia for State of Play and a family trip to Taiwan for two weeks in August.

Finally, I got back the paper drafts at the beginning of September. I input the few remaining corrections -- adding a few missing periods in footnotes, and correcting some minor spacing issues -- and then sent the PDF file to Wells Bindery in Waltham, one of the binderies that Harvard uses for thesis and dissertation work. The hard copies won't be ready for a few weeks, but the content is final. Here's the complete text of the final grade report, written by Prof. Johnston:

This is a first-rate thesis. Lamont worked extraordinarily hard to develop a range of sophisticated quantitative content analysis methods in order to test their usefulness in adjudicated academic debates about the nature of Chinese foreign policy. In particular he used these methods to test whether Chinese diplomacy toward Vietnam from the late 1970s to the end of the Cold War was based on anti-Soviet motivations or based on distinct concerns about Vietnamese influence in Southeast Asia. Lamont did an excellent job of seeking out and using information about content analysis techniques from a number of top experts on content analysis at Harvard and elsewhere. he showed a great deal of creativity in playing around and perfecting the methods and he also demonstrated acute sensitivity to the analytical downsides of these methods.

I've temporarily archived it at the following location:

Making a Case for Quantitative Research in the Study of Modern Chinese History: The New China News Agency and Chinese Policy Views of Vietnam, 1977-1993

I hope to identify a permanent electronic archiving solution in the next few months (Update: The thesis is now available through UMI/ProQuest). A bound copy will be sent to the Extension School as well, and I assume it will either be filed in Grossman Library or the Archives.

There are a lot of people who I'd like to acknowledge here, in addition to Prof. Johnston and Dr. Ostrowski. Here are some brief summaries of how they contributed to my research:

Drs. Doug and Joe Bond of the Weatherhead Center for International Affairs: The "Bond brothers" taught my graduate proseminar in 2003, and introduced me to modern mass media content analysis techniques.

Sally Hadden, Associate Professor of History and Courtesy Professor of Law at Florida State University and a Harvard Summer School instructor in the history of the Old South: She taught me how to prepare high-quality précis, which have been hugely useful in documenting the literature used in my research and cited in my thesis.

Philip Kuhn, the Francis Lee Higginson Professor of History and of East Asian Languages and Civilizations: I took two classes with Prof. Kuhn that relate to modern Chinese history (China in Modern Times in 2003, and Modern Chinese Emigration in 2005), and he was the first Harvard instructor to evaluate a CCA that I had designed on my own based on NCNA/Xinhua data.

Will Lowe, formerly of the Weatherhead Institute's Identity Project, and now of the University of Nottingham: I never spoke with Will in person, but I have communicated with him by email several times. His free, open-source text analysis program, Yoshikoder, was one of the three software tools that proved instrumental to my research (the others were Excel and LexisNexis Academic, but I don't know who to thank for those!)

There are two other constituencies I'd like to thank here. One is my family, including my parents. But my wife deserves an extra-special thanks. I'll excerpt from the dedication that appears on page viii of my thesis, which sums up the sense of appreciation -- and love -- I have for her:

I would like to thank my wife Nicole, who has been the most patient and supportive witness to my academic journey over the past four years. There have been hundreds of nights and weekends that I have spent in my study, conducting research or writing, time that I otherwise could have spent with her and our two small children, yet she never once protested. I hope that I can reciprocate some day, but in the meantime, I would like to dedicate this thesis to her.

Lastly, I'd like to thank all of you. When I started Harvard Extended back in May of 2005, I had no idea that it would attract so much interest: The hundreds of pages on this blog have been viewed more than 100,000 times (my counter reads 85,891, but I didn't activate it until April 2006, nearly one year after I started it). Thousands of people have seen it. Many have been drive-bys or lurkers, but some of you have left comments or sent emails to give support. I've even met a few of you in person.

The words of encouragement have been important, but knowing that I have had this audience has been a strong motivator as well. I would have done the thesis without the blog, but I probably would have been much slower if it hadn't been for all of you looking over my virtual shoulder. Regular updates were required, and this really forced me to consider the progress of my thesis and research on a weekly or monthly basis, and plan the next steps, even if I wanted to procrastinate or take a break from my studies. So thank you, thank you, thank you!

I'll continue to maintain this blog for my next (and last) Extension School class: Survey of Publishing: From Text to Hypertext. It starts tomorrow. Stay tuned!
Posted by I Lamont at 9/17/2007 09:49:00 PM

Allow me to be among the first to congratulate you!You have worked hard and are rightfully proud. Good job!

Thanks for keeping the community informed of your progress, it is a great example of the serious scholarship that goes on at HES.

Congratulations, Ian! When is the party? As I am beginning the thesis process and working hard to get my proposal in this fall, I applaud your long hours, solitary effort, contribution to your field, and persistence. Seriously, you should have a celebration... :)

Thanks for the kind words, Carlos and Chris.

Party? I hadn't thought about it. If anything, I should probably take my wife on a mini-vacation for putting up with my classes and research for so long ...

Congratulations! You are a pathfinder. Thanks for all you do!

Thanks for all of the support, gang. It's really great to get this out of the way, after more than two years of work.

Just one more class to go!

Dear Ian,
I thoroughly enjoyed reading of your thesis progress. I am studying Xinhua in Oxford and would be greatly interested to read your thesis. Is it available in England/ on the internet?
Many thanks.
Amanda

I'd be glad to send you a copy. Contact me at ianlamont at post dawt harvard dawt edu