(Note: Videos and pictures of the June 5 ceremonies are available below) Commencement 2008 is finally over. It wasn't just today's exhausting slate of ceremonies -- it was a whole week of activities and get-togethers that brought students back to campus over several days this week.

For the Liberal Arts ALM recipients, there was a pleasant Faculty Club reception on Monday in which prizes were announced. On Tuesday, there was also an alumni reception and dinner at Quincy House (see photo, below, from the Quincy House courtyard), the first I've ever attended, in which I got to meet some older ALM and ALB graduates, as well as some members of the class of 2008. Last night, some of us got together at Daedalus after making plans on ExtensionStudent.com. At all of these events, it was a good chance to reflect, trade war stories, and talk about the future. The stories I heard were fascinating -- some people had to go through incredible struggles to complete their degrees, and others managed to complete their degrees despite years-long interruptions, travel and family obligations, and high-powered careers. Examples that spring to mind include the ALM/Women's Studies student who stopped her coursework to get a degree from the Harvard Divinity School, the Harvard Medical School doctor who managed to get her ALM in Literature and Creative Writing and write a prize-winning thesis, and an ALB student and honor's society member (I believe Phi Beta chapter of the Alpha Sigma Lambda society) who completed her final four courses online in one semester while working a full-time job in Korea and Japan. 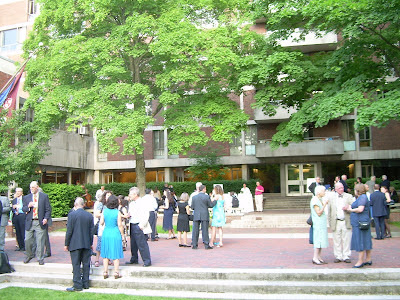 But Commencement was the main event. I've never participated in anything like it, and probably never will again. There are so many memories, and it involves many traditions, ranging from the archaic to the raucous. And it was all quite splendid. Highlights included a bagpipe-led parade from 51 Brattle Street to the rear of Sever Hall for the morning exercises; the Middlesex County Sheriff bellowing for the tens of thousands of people in Tercentenary Theater to come to order; the spontaneous chants of "Vincimus!" (we conquer!) during the Latin Oration; the sobering yet encouraging Graduate English Address by Anthony Christopher Woods, an Iraq war veteran who just completed his studies at the Kennedy School; the playful waving of inflated globes, pills, gavels, bills, and lanterns as the various school populations received their pronouncements from President Faust; and the final, joyous diploma ceremony at the Loeb Theater, with family and friends watching.

And let's not forget the crowds, the drizzle, the confusion. And the waiting. Lots of waiting -- for parades to start, for the black- and crimson-clad graduates to get into Tercentenary and Loeb theaters, and finally, the wait for the speeches to end so we could receive our diplomas.

Here are some photos from the day ...

Our marker in the Sever Quad, around 8 am. I'd say around 300-350 of us gathered here after marching from 51 Brattle Street behind a piper. This figure includes ALB and ALM students, but not the certificate recipients, who don't participate in the Tercentenary Theater exercises. 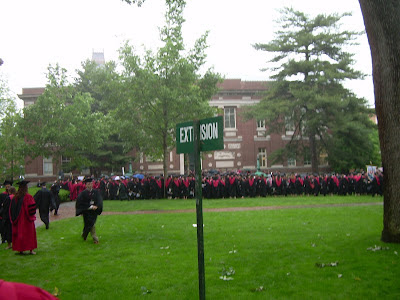 ALB and ALM graduates, seated in the center of the throng between Widener and Memorial Church, where the addresses were made. The ALB (undergraduates) wear all black, while the ALM (masters) have red academic hoods draped over their shoulders (the same regalia as our counterparts from the College and the other schools). About eight of us in various ALM programs received the Class Marshal Award for Academic Distinction, which meant we also got to add a red tassel to our hats and carry a small baton. 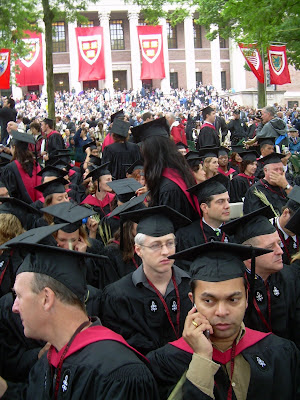 Looking toward the steps of Memorial Church, where Faust, the deans, and the honorary degree recipients were seated. It drizzled lightly at times, and the trees above us also dropped twigs and little buds in the wind, but it did not rain. Divinity was in front of us, and the College houses off to the left. 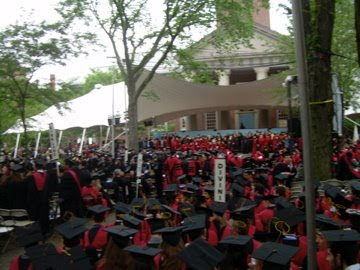 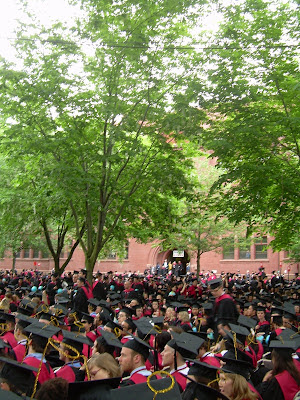 Widener steps, after the morning exercises. 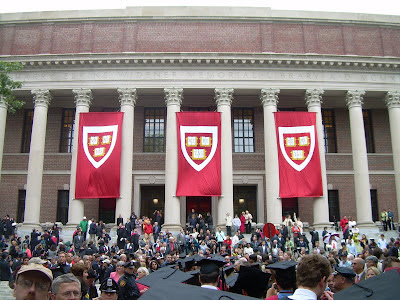 Around 1:30 pm, ALM Liberal Arts grads gather in the back alley of Christ Church, for the short march to Loeb/ART on Brattle Street. In back of us were the ALM/IT graduates. The ceremony for the ALM Management (103 graduates, and the program is only two years old!), ALM/Museum Studies and one or two other concentrations took place in Loeb while we were waiting here -- even if there were a large enough hall to hold all of us and our families, the ceremony for such an event would last three or four hours, including the speeches and prize announcements. 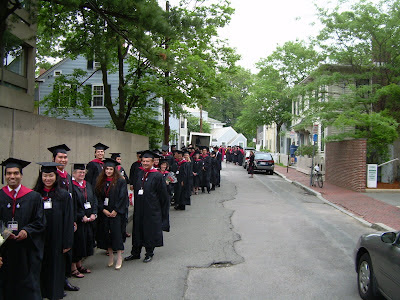 I also wanted to include a video of part of the final ceremony, in which prizes were announced and our diplomas given to us. Dean Shinagel gave a short speech in which he described some of our accomplishments and some stats about the ALM program. He also named the winner of the "tortoise award," an amusing title for something that truly is awe-inspiring:

One final thing I'd like to mention about Commencement 2008: The morning exercises is the only event in which all of the diploma-earning students from the University -- College, Extension, Divinity, Education, Government, Public Health, etc. -- are brought together in a shared Harvard experience, one of the oldest and most important ceremonies at Harvard. As we watched the other 2008 cohorts parading into Tercentenary Theater, wearing similar regalia and sporting similar smiles, I was very conscious of the fact that we really were actually quite similar. Our respective schools may teach different things and have different requirements, but for years we all shared a dedication to study and a drive to succeed at one of the most special learning environments on the planet. This was the day when we finally all came together, after which we all will go our separate ways, forever.
Posted by I Lamont at 6/05/2008 09:08:00 PM

Congratulations, Ian! Savor this experience for a while.

Thanks for putting this post up, it's inspiring and fun to see. Hope to have my own story up next June. Good luck in your future endeavors!

Thank you, Ian, for sharing your day with your readers.

Chris and Rodney, your comments are very kind and the congratulations from you as well as our friends and family were wonderful to hear. It took us a long time to get to this place (in one case, 20 years -- listen to the video for details) and the ceremonies that capped it off were quite special. Both of you will know the feeling soon enough :)

Congratulations Ian! Thank you for sharing the happiness of this day.