The Extension School and campus organizations: My experience with the HIMG

I first started taking classes at the Extension School in 2002, and formally matriculated into the ALM program in 2004. However, other than attending some seminars and symposia over the years, and joining a few Extension School gatherings, I haven't been involved with clubs or other extra-curricular activities at Harvard. Besides being far too busy with school, work, and family, I also haven't been able to find an on-campus group that really aligns with my personal, academic, or professional interests. 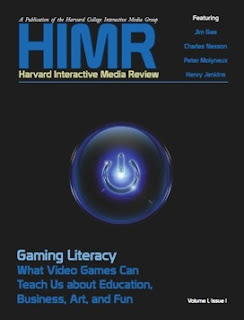 Until now. When I was in Singapore for State of Play V, someone distributed copies of the Harvard Interactive Media Review. It was an interesting read. The first issue contained an interview with Berkman Center founder and Law School Professor Charles Nesson (who helped bring Harvard's first virtual worlds-based course to the Extension School) as well as essays about business in the metaverse, new media literacy, and virtual learning. Some of the issues dovetailed with what I have written about in my personal blog, on Computerworld.com, in Terra Nova, and elsewhere.

I found out that the Review was published by an on-campus organization called the Harvard Interactive Media Group, which is an official student group of the College and has members from a few of Harvard's graduate/professional schools. According to the HIMG FAQ, the group aims to "bring together Harvard students and professors with members of academic and development communities beyond to explore the form and impact of interactive media, video games in particular." The FAQ also notes that Harvard has been lagging in this field:

While certainly our projects are valuable in and of themselves, we view them also as a means of establishing momentum, as facts on the ground, in our longer-term bid for an official interactive media program here at Harvard. Schools around the country—MIT, Carnegie Mellon, USC, Indiana, Madison, and others—are moving aggressively into the interactive media space. Harvard is being left behind.

In the past, be it with digital computing or Psychology, Harvard has been a leader in the exploration of burgeoning academic fields. We believe that Harvard should reprise this role, and ensure that its leadership carries over from the physical world into the virtual one as well. For now, we’re networking with various departments around the University. In the next five to ten years, we hope that the HIMG will be a launching point through which Harvard, as an institution, can leap into the field.

This semester I have started to participate in the HIMG meetings and activities. Through the group, I was able to attend a panel discussion at the Business School a few weeks ago ("The Business of Video Games: From Virtual Worlds to Casual and Serious Games"), and next Saturday afternoon we are holding an on-campus event on Immersive Education. (preliminary information here, and I'll post the official description of the event in a separate entry).

Besides the HIMG, Harvard Extension School students participate in other on-campus groups. A friend of mine joined the Kendo club, the Harvard Graduate Council has included ALM students in its governance and activities over the past few years, and Extension School volunteers have joined Phillips Brooks House Association programs. Many clubs and organizations welcome students from across the University, and these are great opportunities for Extension School students to participate in campus life beyond taking classes and conducting research.
Posted by I Lamont at 12/01/2007 08:43:00 PM