Who says data visualization has to be boring? 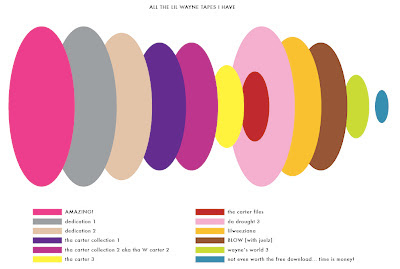 This should appeal to anyone who works with quantitative research and is a music fan: It's a blog devoted to entertainment-related data visualizations.

Emo+Beer=Busted Career hard to describe unless you visit the site, but some of the examples include color-coding newspaper reviews of pop music according to whether the sentences within the review were informative, positive, negative, or jokes. Another applies colored bubbles of various sizes that describe the blogger's Lil Wayne tape collection.

The blogger in question is named Andrew Kuo ("earl boykins"), and he even got a write-up in the New York Times, which also supplied a summary of visualizations that apply to one of Kuo's favorite artists, Bright Eyes (Conor Oberst). See some of the charts which the Times gathered, such as "Quality Arc of Each Show," "Number of Times Certain Entertaining Phrases Were Shouted," and "Number of People Onstage at the End of the Encore"
Posted by I Lamont at 6/12/2007 10:05:00 PM