Presentations and an online protest in a Chinese MMORPG

Twice in recent months I've given presentations about future media trends. The first presentation was at the Siggraph Summit at Boston City Hall. The second was at Boston College, to a smaller group. It was very interesting drawing upon my print and television journalism experience, as well as my current work at Computerworld producing blogs and podcasts.

I was also able to draw upon my academic interest in Chinese mass media and Internet development in my presentations. I cited two examples. The first relates to the increasing connectedness of the Chinese population, and how they are using cheap video cameras, camera phones, and other devices to capture and distribute images that bypass the official messages put out by Xinhua/NCNA (新華社) and other state-sanctioned media outlets. These developments will have a wide-ranging effect on how people in China (and, for that matter, all over the world) understand news events:


Think about Tiananmen Square and its most enduring image. The guy standing in front of a tank. There were two shots of this incident, both taken by pros. Imagine if something similar took place with thousands of people uploading images and video from the scene. We're already starting to see that ... the most recent example is the 2004 Tsunami, where most of the footage was from people on holiday pointing their cameras out of the windows of their hotels.

(Since I gave this presentation, there has been a more relevant news event relating to China, the video from the Rui'an riots.) 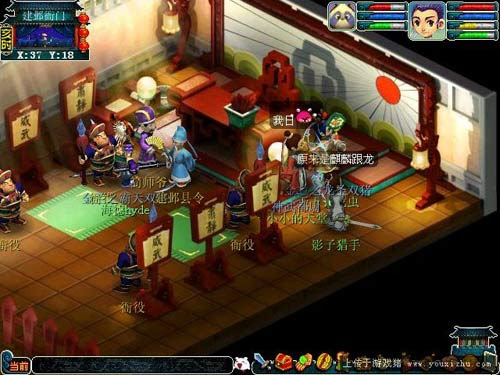 Online protest in a Chinese MMORPG

The second example was something I picked up from Roland Soong's EastSouthWestNorth blog (東南西北). Roland spotted a Beijing Evening News report about an online protest in a Chinese MMORPG which is, I believe, the first example of a mass protest over real-world issues taking place in a virtual world. The protest was sparked by a mural in the game which looked suspiciously like the "Rising Sun" flag the Japanese used in the 1930s and 1940s:


A virtual demonstration, in a Chinese online 3D game. Thousands of players from all over China converging on a virtual space, to vent about a virtual prop. These are people who are very comfortable in a 3D environment, and even bringing real-world concerns there to discuss.

Incidents such as these will become more common in the years to come, and will have a very big impact on the news, newsgatherers, and audiences all over the world.

While I am on the subject of presentations and my professional experience, here are a few links to check out. The blogs are my own; the podcasts I produce and co-host with my colleagues at Computerworld.
Posted by I Lamont at 9/19/2006 09:12:00 PM