My wife was naturalized yesterday. It was one of the most unusual ceremonies I have experienced -- more than 3,075 foreign-born residents from all corners of the planet were gathered into the Hynes Convention Center in Boston and naturalized en masse.

It took three hours to get everyone processed and sitting in the correct seats (the certificates were handed out in order when they left the room, so people had to sit in certain rows). Judging by the languages I heard around me, and the appearance of the people crowd, the new citizens from the Boston ceremony were dominated by immigrants from Latin America and the Caribbean, with smaller numbers from Africa, Russia, China, and Southeast Asia.

Once everyone was seated, the ceremony was officiated by a judge, and what they did was temporarily turn the austere concrete hall into a courtroom so the aliens could take the oath and then be pronounced citizens. A smaller group (475, or thereabouts) had name changes as well (many to Americanized first names). The judge carried out these tasks within a few minutes -- kind of reminded me of Feng Yuxiang's (馮玉祥) mass baptisms by firehose. He then gave a very nice speech, telling them how important immigrants are to this country, and how much they have contributed to society. He used examples of famous people (Albert Einstein, I.M. Pei, Manny Ramirez, Arnold Schwarzenegger, etc.) and also pointed out that many children of immigrants achieve success as well, such as two of the Supreme Court justices.

We were of course very glad; the process has taken us years, with an unbelievable amount of intrusive, insulting, inefficient, and unnecessary bureaucracy. She had to have her fingerprints taken three times, the INS/DHS entered the incorrect birthday into her record, we paid thousands of dollars in fees for terrible service, etc. But we put up with legal requirements and now she is an American, with all the rights and responsibilities that come with citizenship. 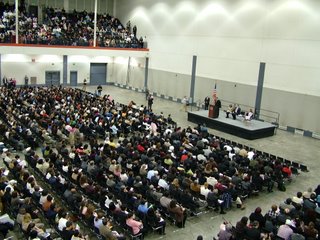 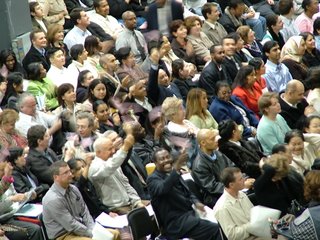